Did you know that one pair of uncastrated dogs or cats, plus their offspring, could lead to a population of several thousand animals in five years?

Assuming a pair of cats gets two litters per year and each time 2.8 kitten per litter, then after 10 years you will get 80 millions cats.

If a pair of dogs gets two litters per year and in each litter three dogs survive, then ... 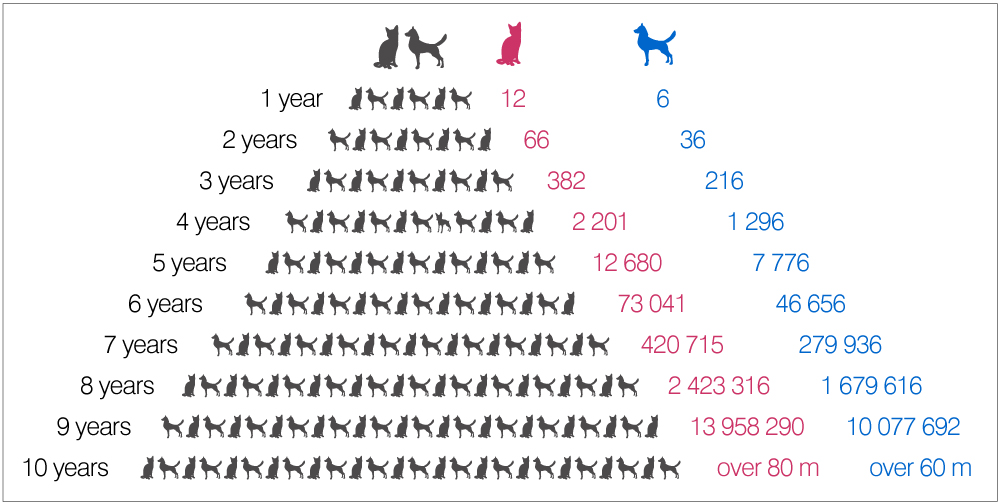 We are all familiar with the picture: countless stray animals in the towns and villages of Southern and Eastern Europe. Because of ignorance, animals end up on the streets all the time. Whole litters are left outside or "discarded" like waste; many animals that have not been castrated, living their lives half-feral and unattended, with no one taking responsibility for their offsprings. Countries’ authorities usually display powerlessness or have the wrong approach to the existing problem. The worst scenario is capturing the animal and killing it. Every year, thousands of healthy dogs and cats are poisoned, shot or gassed legally or illegally. The survivors often live in miserable conditions, they get sick, and no one takes care of them. 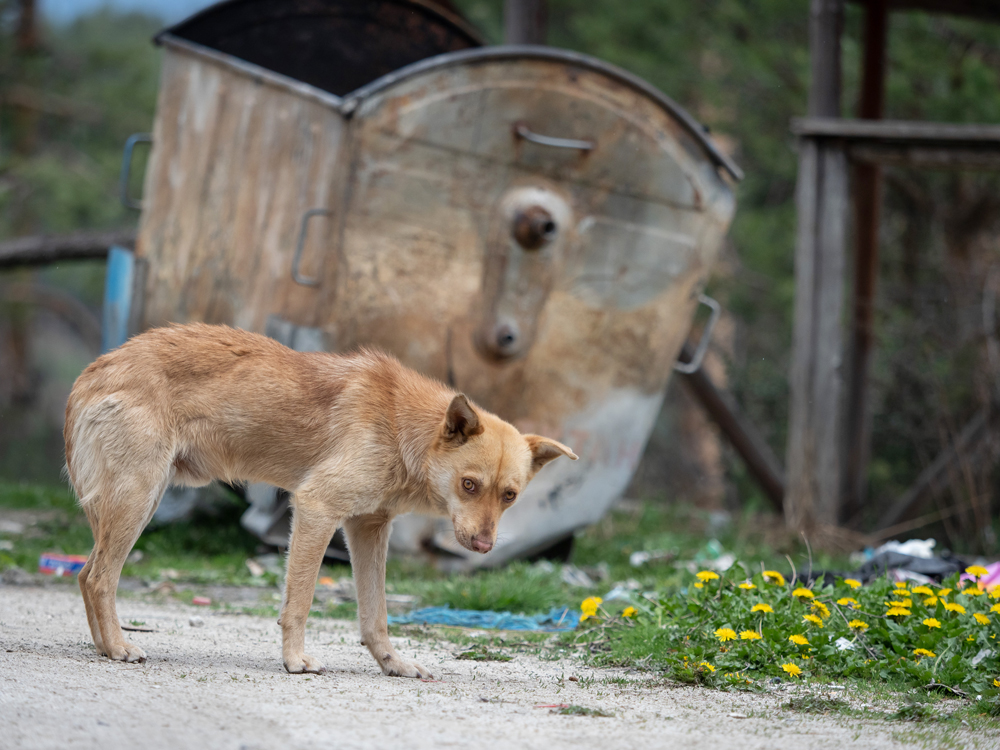 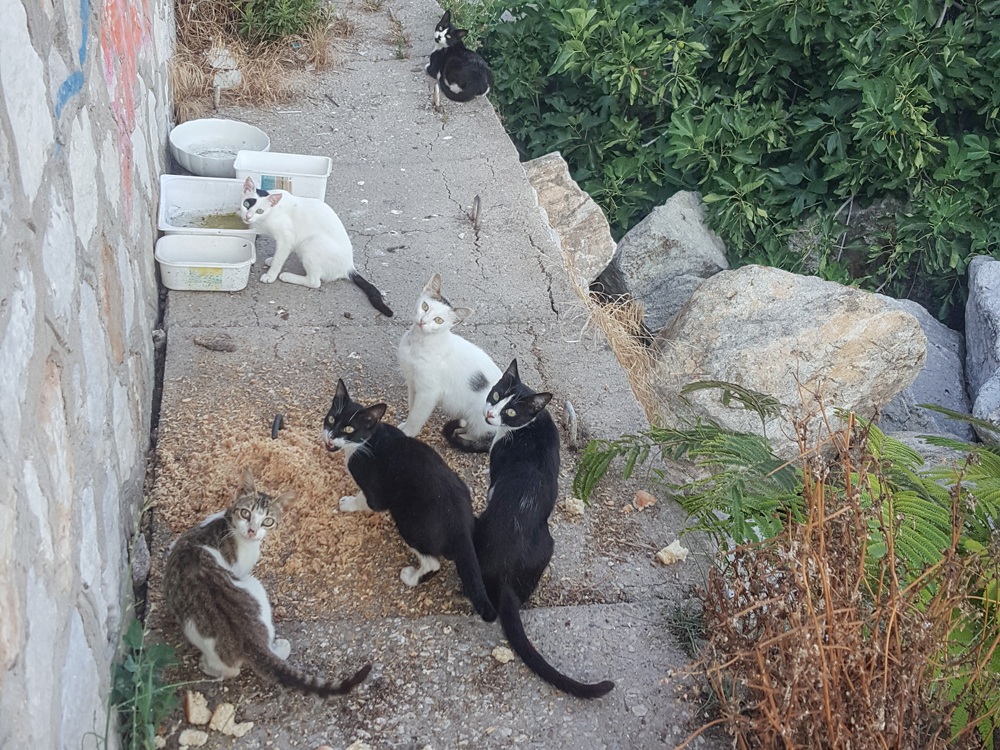 From a veterinary point of view, this approach is both brutal and pointless.

Without a reduction of the birth rate, the ‘vacancies’ will soon be filled by new animals and numbers will go back up to the same levels. The only sustainable and humane solution to the problem consists of three parts:

• Large scale castrations, whereby the animals are returned to their roaming territory after surgery.

• Education in the responsible ways to be a pet owner, firstly by educating individuals and by neutering or spaying as many pets as possible, which, by producing unwanted litters, are at the root of the problem with the stray animal population. Secondly, the education of children for the responsible handling of animals.

• Law enforcement against people who mistreat animals or abandon them. Neutering/spaying, education and law enforcement – constantly implemented by the vets in action – are the measures that, through visible results, finally lead to a change of mindset: in Greece, there is already a great deal of interest in the implementation of castration and information campaigns in several districts. They are also willing to take their share of responsibility in it. Vets in action castrate about two thousand and five hundred animals every year. This is done both continuously and in concentrated actions in which – thanks to the help of our volunteers – around at least thirty animals per day undergo surgery. 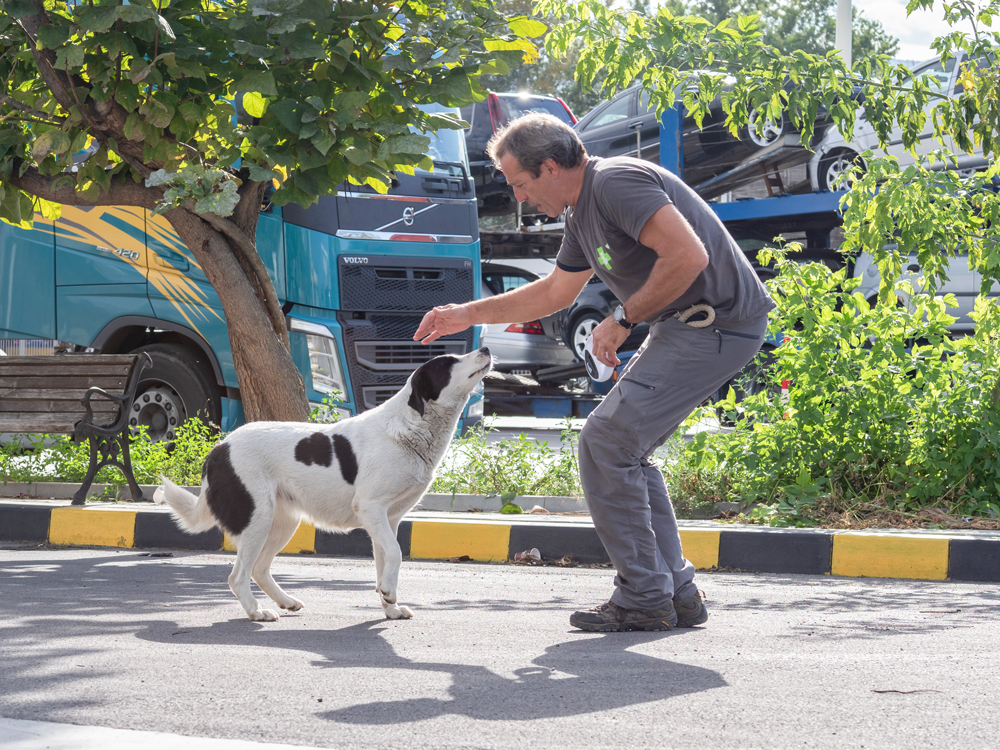 Capturing the animals is the first step in a castration action
Patience and love during the catching of the animals are important. 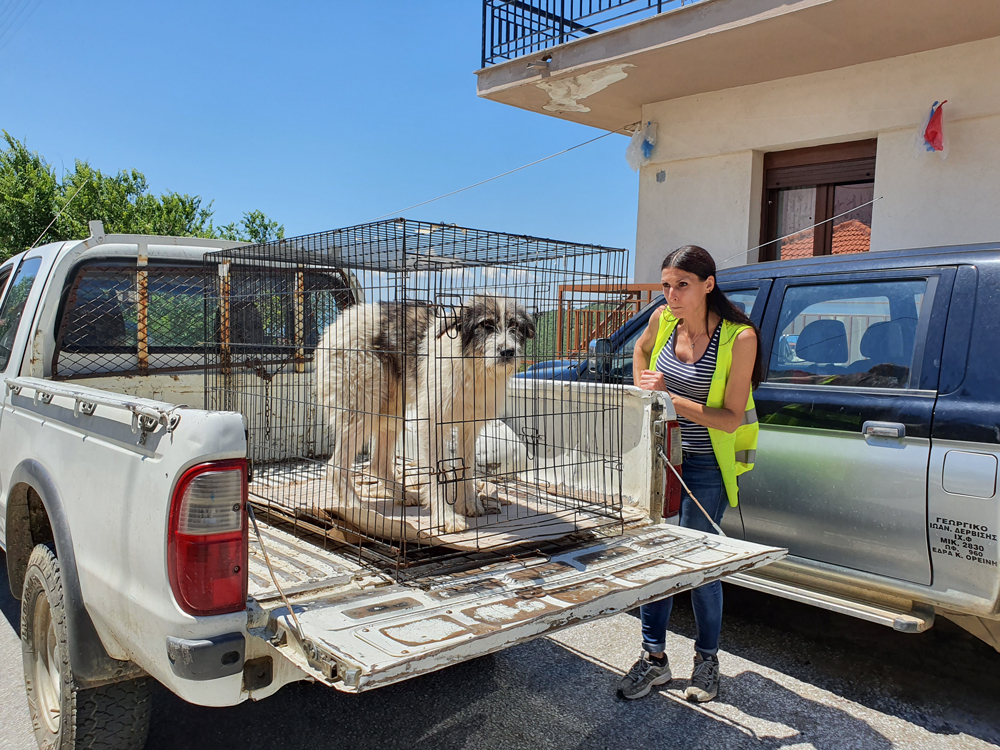 The more the municipalities support us in capturing and delivering the animals, the more we can neuter. 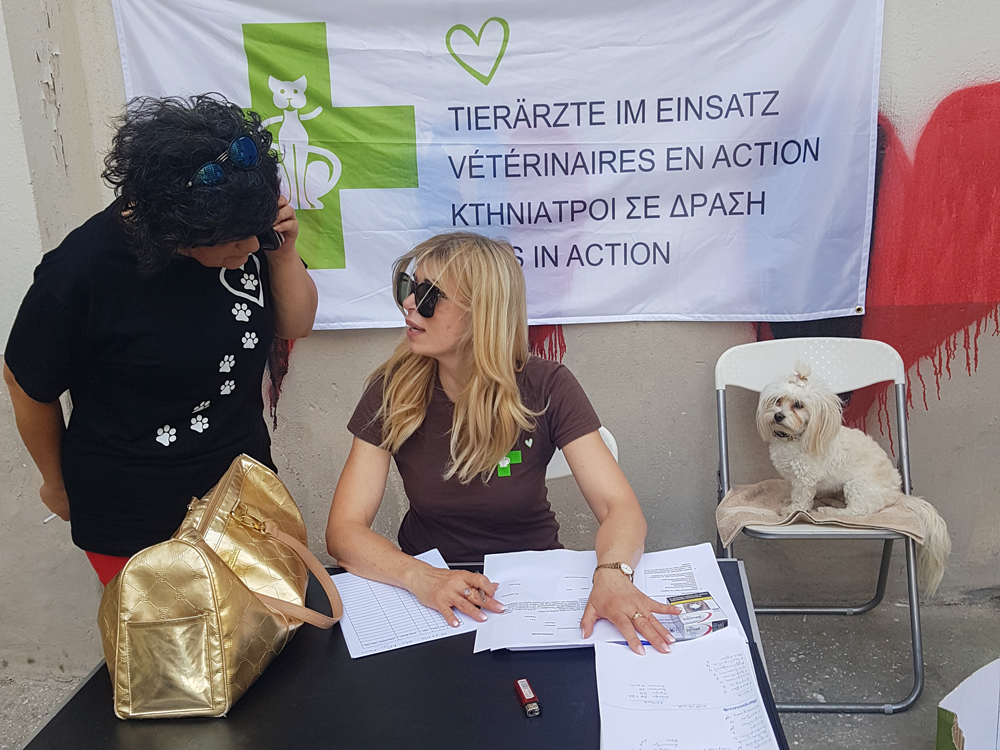 All treated animals are registered and all dogs are chipped. 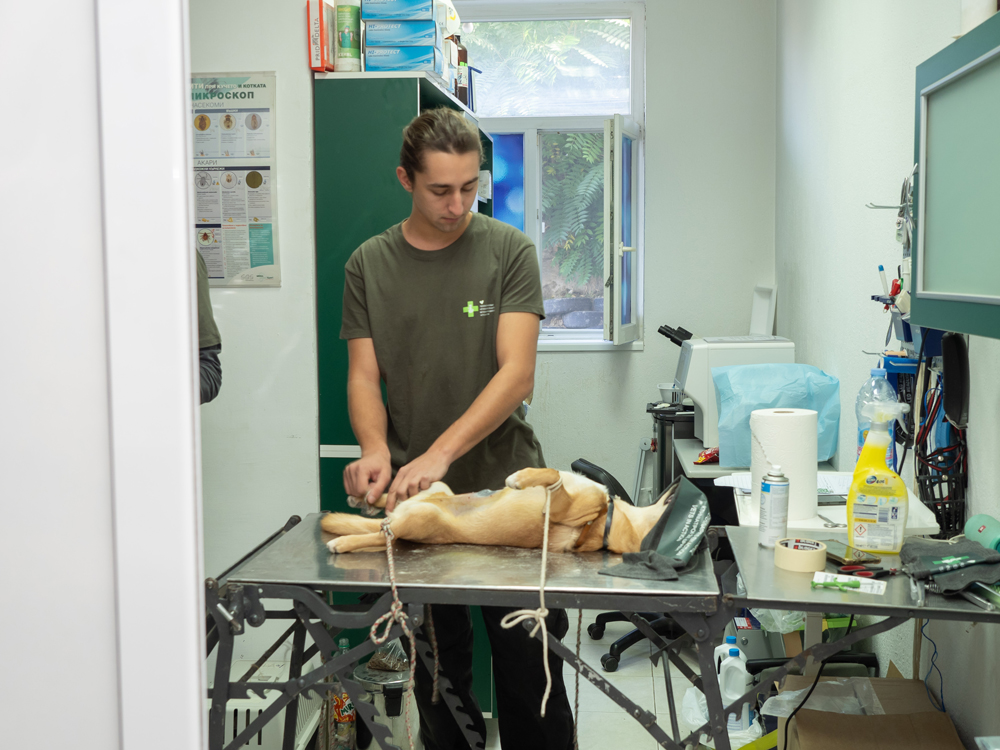 Preparatory work such as shaving is often carried out by volunteers 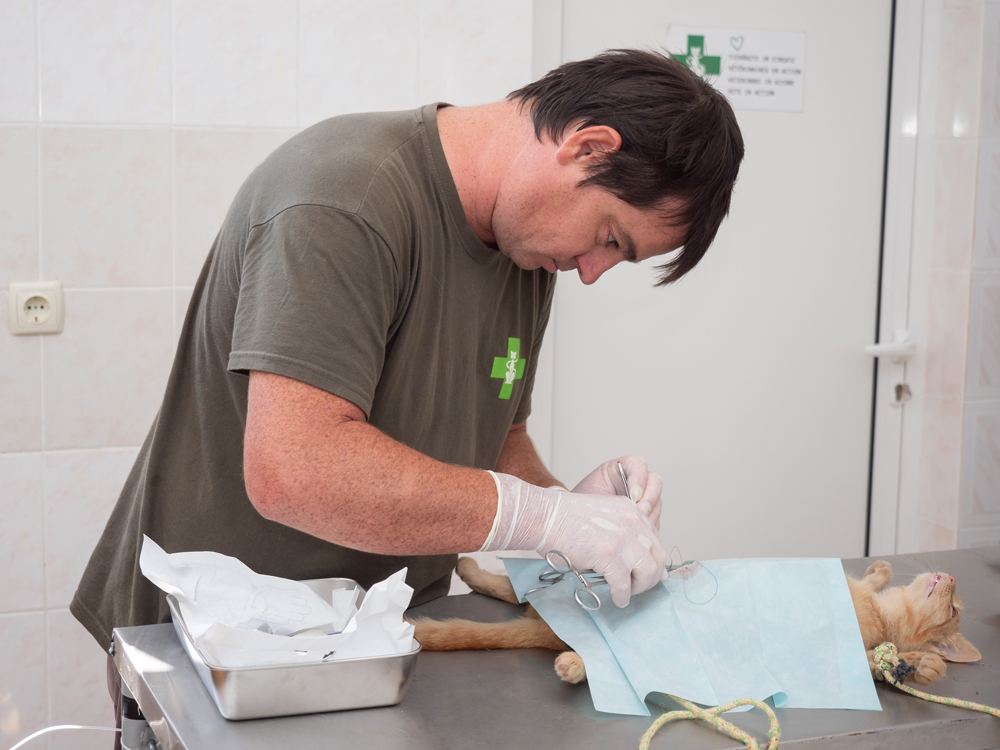 Under normal conditions, the vets operate about 35 animals per day. 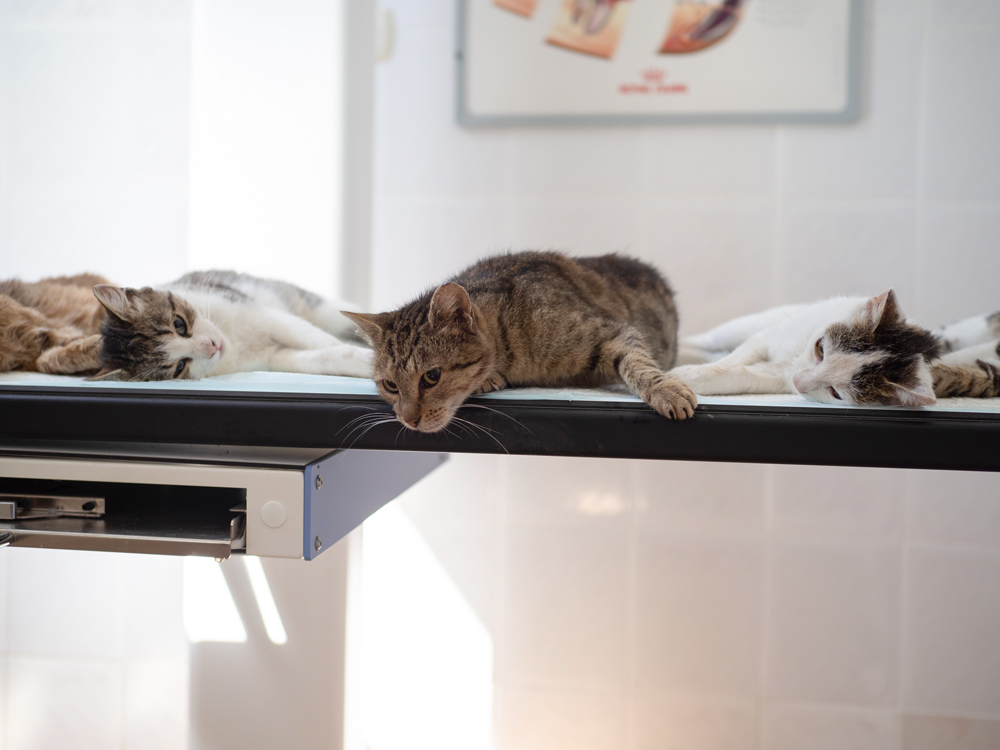 Only when the animals are fit again they will be returned to their place of capture.
There they will defend their territory, but no longer multiply. 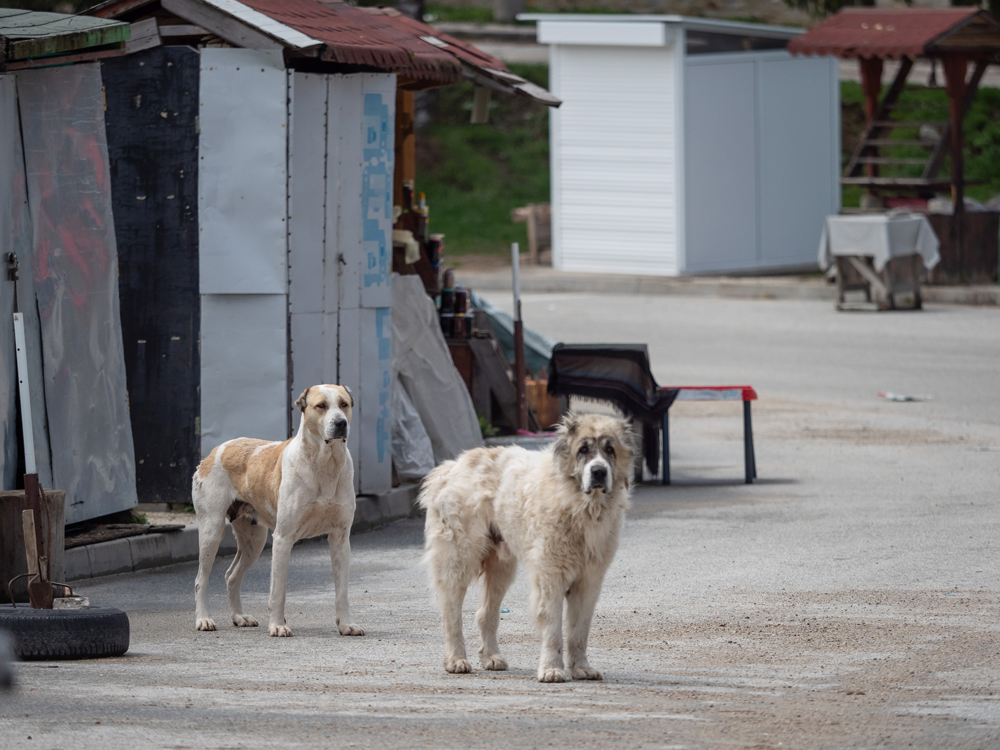 The animals are not only neutered, but also vaccinated and treated against parasites.
This increases the health status of the entire street animal population.

The following links provide insight into some of these actions.